So, to celebrate the TPK-related end of the first (shortish) Zu campaign, here's the map AND the key to the Iron Courts, the place where the party has met its demise. Appropriately to the name, this complex of rooms and corridors is made entirely of metal - in most places the walls, floor and ceiling are a single slab of smooth, grey metal with rust-coloured stains and streaks; in others, it's metal plating (or more solid metal) of a different type. 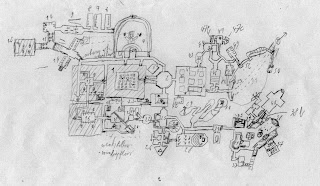 And the key as a Google document (right-click and select Open in New Window - doesn't seem to work otherwise for some reason.)

The reader might notice an extreme lack of treasure here - that's by design. This sublevel is sort of a "punishment level" where certain wizards have the ability to banish their enemies; as such, the greatest accomplishment one can reasonably expect here is to escape through the large cave at #50.

And just for posterity:
- Hokiman (shaman): despair drove him into passive-agressive behaviour and started deliberately grabbing at the urns in room 42.
- Vestiron (sorcerer): Got too greedy and irresponsible for his own good. Ran out of Hit and Ability Points before figuring out how to remove the urns in room 42 safely.
- Cassandra (Lowlander ranger), Crowley (sorcerer), Sizzy (female beastman): Slowly worn down and killed by two Rust Guardians on top of the battlements at 52. The fight lasted over a dozen rounds, but it didn't occur to them to run. To their credit, they took one of the two enemies down.